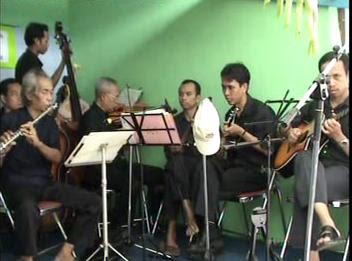 Kroncong (pronounced "kronchong") is the name of a ukulele-type instrument and an Indonesian musical style that typically makes use of the kroncong, a flute, and a female singer. Characteristics

The name "Kroncong" may be derived from the jingling sound of the kerincing rebana, as heard in the rhythmic background to the music created by the interlocking of instruments playing on or off the beat. This background rhythm runs faster than the (often) slow vocal or melody, and is created, typically, by two ukuleles, a cello, a guitar and a bass. These instruments, especially the pair of ukeleles, interlock as do the instruments in a gamelan orchestra, and it is clear that the musical traditions of Indonesia have been applied to an orchestra of European instruments.
One ukulele, called the "cak" (pronounced "chak") may be steel-stringed and the instrumentalist strums chords with up to 8 strums per beat in 4/4 rhythm. The off-beat strums are accentuated. The other ukulele, called the "cuk" (pronounced "chook"), is larger and may have 3 gut or nylon strings. The instrumentalist may pluck arpeggios and tremoloes using a plectrum, and the on-beat is emphasised. As a set, the cak and cuk form an interlocking pair that mostly gives Kroncong its characteristic kron and chong.
The cello may have 3 gut or nylon strings and chords are plucked rapidly, often with a unique skipped-beat, using the thumb and one finger. This instrument then adds both rhythm and tone. The guitar may play similarly to either cak or cuk but, more often, plays extended scalar runs that provide an undulating background to a chord or bridge chord changes. The bass often is played in a minimalist style reminiscent of the large gongs in a gamelan.
On top of this rhythmic layer the melody and elaborate ornamentation is carried by a voice, flute or violin. The violin or flute are used to play introductory passages (often elaborate), fills and scalar runs, both faster and more elaborate than the guitar. The vocalist sings the melody which, in traditional Kroncong, is slow with sustained notes.
The repertoire largely uses the Western major key with some arrangements in the minor. One departure from this occurs when Kroncong orchestras play Javanesse songs (Langgam Jawa). Javanese music ordinarily uses scales and intervals that do not occur in Western music. Kroncong Jawa maintains Western intervals but adopts a 5-tone scale that approximates one of the main Javanese septatonic scales. When playing this style, cak and cuk leave their characteristic interplay and both play arpeggios to approximate the sound and style of the Javanese instrument the siter, a kind of zither. The cello adopts a different rhythmic style as well.
History


Kroncong music began in the 16th century as sailors brought Bobian instruments and music to Indonesia. Lower-class citizens and gangs, commonly called buaya (a reference to "buaya darat" or crocodile on land, a term used to describe playboys to this day) adopted the new musical styles. Eventually, they were assimilated by the upper-class citizens. Paul Fisher writes,

The small kroncong guitar, also the name of a music, is derived from the Portuguese braguinha, sharing its root with the Hawaiian ukulele. Kroncong music is believed to have originated in the communities of freed Portuguese slaves in the 16th century. European influence from this time can also be heard in the music of the Batak people of North Sumatra, and from the end of the 19th century, the beginnings of guitar accompaniment incorporated within a distinctly Indonesian idiom in music from Sumatra, South Sulawesi and elsewhere.

Kroncong (currently spelled Keroncong in Indonesian) is now considered old-fashioned folk music by most Indonesian youth, although efforts have been made since the 1960s to modernise the genre by adding electric guitars, keyboards and drums, notably in so-called Pop Keroncong sung by Hetty Koes Endang. The melancholic spirit of traditional, acoustic Kroncong (so similar to Portuguese Fado music) has been recorded by Samuel Quiko and the members of his Jakartan Krontjong Tugu Orchestra, who have performed at the well-known Pasar Malam in The Hague. 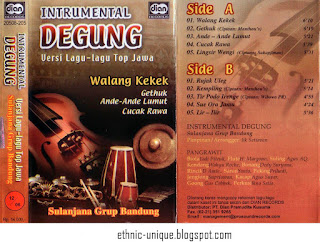 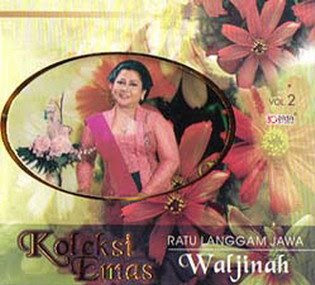 Waljinah is one the most famous and beloved Javanesse traditional singers, especially with her song "Walangkekek" which made her very popular among the javanese. She also has made some collaborations with top Indonesian artists such as Didi Kempot, Gesang, Titik Puspa, Chrisye and so on.
She was born in Surakarta or Solo, Central Java province, Indonesia in 1945. She is the 10th child of the family. Her father was an artisan, working on the batik factory as a painter. While her mother worked on market selling food. It's in the batik factory where her father worked that Waljinah began listening to traditional Javanesse song & music. It's assumed that this events inspired her to become a singer.
During her study time on high school, she develop her interest on keroncong music, and on 1958 she enter a singing competition held by Indonesian stated owned radio station, RRI Surakarta, and won the prize. Since then, her career as a professional singer began. So far, she rocorded no less than 200 albums, with over 1500 songs.One of her famous song ( Enthit ) was recorded by Lokananta music studio in Surakarta.
Songs :
Walang Kekek
Caping Gunung
Kutut Manggung
Ojo Lamis
Gethuk
Kangen
Yen Ing Tawang Ana Lintang
Rondo Kempling
E jamune
Ande Ande Lumut
Keroncong Blitar
Pamitan
Kacu Biru
Luntur
Ela Elo
Nyidam sari
Merem Melek
Klamben Klamben
Grimis Grimis
Ojo Gawe Gawe
Diposting oleh Fadel di 21.05 2 komentar: